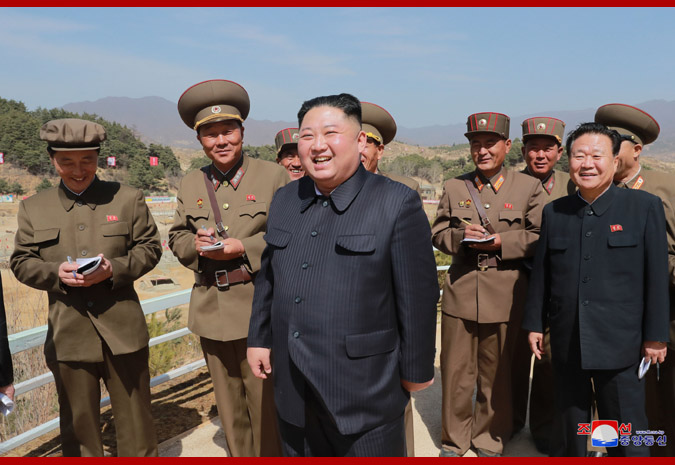 Pyongyang, April 6 (KCNA) — Kim Jong Un, chairman of the Workers’ Party of Korea, chairman of the State Affairs Commission of the Democratic People’s Republic of Korea and supreme commander of the Korean People’s Army, gave field guidance to the construction site of the hot-spring tourist area in Yangdok County, South Phyongan Province.
Supreme Leader of the Party, state and army Kim Jong Un noted that people would be pleased to play skiing in the day time and take a rest while taking baths in hot-spring in the evening by building a ski ground around the hot-spring tourist area under construction in Yangdok County. And he repeatedly learned about the winter climate condition and geographical features of the area and gave the relevant field the detailed tasks and ways for building a ski ground.
He looked round every nook and corner of the construction site after learning about the construction project while watching the newly made master plan for the Yangdok hot-spring tourist area.
Expressing great satisfaction over the fact that a bright outlook for the project is seen as the ground excavation and concrete tamping and substructure project of all the construction objects such as recuperation district, rest district, general service district and hotel district charged by the KPA have been carried out as scheduled, he highly praised the soldier-builders for their high spirits.
He said that making a field survey of the construction sites today once again, he could know Yangdok area has a favorable natural and geographical condition for building a ski ground as it has high mountains and much snow along with low temperature in winter. Noting that the yield of hot-spring water has not changed and its temperature is very high in the area though it is under construction, he was very pleased to say that the general sporting and cultural rest center and the health treatment service center for hot-spring bath and skiing would be built in the fameless and quiet mountainous area.
He said that the construction speed should be hastened and the operation unit should make meticulous service preparations one by one from now so as to operate the hot-spring ground and ski ground from winter this year. He pointed out that deep studies and good management strategy should be made for perfect operation and service of the Yangdok ski ground in a higher level on the basis of experience gained in operating the Masikryong Ski Resort.
He noted that the soldiers of the People’s Army who always reply “Yes” to the Party’s call come across his mind before anyone whenever the Party determines to carry out such large construction projects demanding high technical and qualitative level as the Wonsan-Kalma coastal tourist area and Yangdok hot-spring tourist area. He said the People’s Army should fully demonstrate the might as creator of people’s happiness and pioneer of high civilization by devotedly implementing the Party’s plan and determination.
He was accompanied by Choe Ryong Hae, vice-chairman of the Central Committee of the WPK, and Jo Yong Won and Pak Chang Ho, vice department directors of the C.C., WPK. -0-
2019.4.6