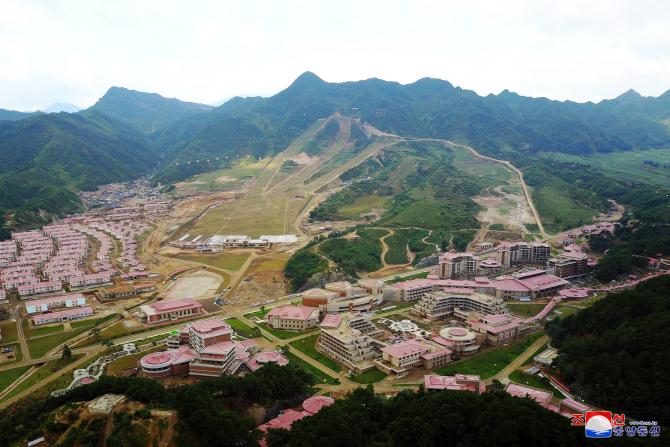 Pyongyang, August 31 (KCNA) — Kim Jong Un, chairman of the Workers’ Party of Korea, chairman of the State Affairs Commission of the Democratic People’s Republic of Korea and supreme commander of the armed forces of the DPRK, gave field guidance to the construction site of the Yangdok County Hot Spring Resort.
Making rounds of various places of the construction site of the hot spring resort for a long time, Supreme Leader of the Party, state and armed forces Kim Jong Un said with satisfaction that the characteristics of nature and topography were well preserved and a peculiar resort was formed in good harmony with the surrounding environment as planned by the Party and the section and arrangement are practical and every building is impeccable in view of architectural beauty.
Saying that the sphere of a new cultural and emotional life in which skiing ground is combined with hot-spring recreation ground was created, he noted with pleasure that the Yangdok County Hot Spring Resort is the edifice in which the people-first principle-based architectural idea of the Party is fully embodied and everything serves the people and their demand is met, and if the resort is once completed, it will become a cultural recreation ground for the people that a lot of people love to visit.
Pointing out that we should inscribe the proud picture of Korean-style socialist system even in such small-sized edifices and help the people more deeply cherish a great pride and patriotism through the daily-changing appearance of the prosperous and highly civilized country, he earnestly called for giving the people the Yangdok County Hot Spring Resort completed on the highest level as a gift by doing the finishing work qualitatively and tactfully.
Saying that it is necessary to start the operation in December this year by making full preparations for the operation of the hot-spring recreation and medical treatment facilities and taking a thorough step for supply of sporting goods to the skiing ground, he repeatedly stressed the need to qualitatively complete the project and for the relevant domain to make full preparations for the service so that the people who visit the resort may not feel a slight inconvenience.
Enjoying a bird’s-eye view of the construction site, he said that he visited the resort under construction after a gap of four months, but he did not know where he stood as it underwent a dramatic change, that solider-builders finished a project as large as the building of a city at lightning speed. Noting that it is quite right to entrust the unit which has the strongest fighting capacity in the People’s Army with construction, he said that the unit carries out the construction like the specialized construction unit and it is, indeed, a mighty unit.
Noting that the plan of the Party has been carried out by the People’s Army which accepts the Party’s plan and intention as the absolute truth and always carries them out unconditionally and devotedly, he said that he regards it as his greatest joy and pride to pave the road of revolution together with such army.
Saying that all the builders including the provincial people, shock brigade members and railway workers, and officials and workers in charge of supplying construction materials have taken particular trouble, he asked commanding officers of the unit to convey his satisfaction and greetings to all the builders and encouraged them.
He was accompanied by Choe Ryong Hae, member of the Presidium of the Political Bureau of the Central Committee of the WPK, first vice-chairman of the State Affairs Commission of the DPRK and president of the Presidium of the Supreme People’s Assembly of the DPRK.
Also accompanying him were Kim Yo Jong, Jo Yong Won, Hyon Song Wol, Ma Won Chun and other senior officials of the Party Central Committee and the State Affairs Commission. -0-
2019.8.31